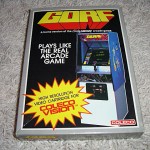 Gorf™ by Bally/Midway™ for ColecoVision™ was one of my brother Daves’ better games. He used to kick my butt at it. We had a lot of fun though, and the ColecoVision™ version is an awesome one! It has four levels which was a lot in 1983 and each and every level was fun and challenging. The ColecoVision™ version did not have the voice effects of the arcade game, but included almost everything else. If you like trying older games and you like space shooters from the eighties, this is not a bad one at all to try. It holds up pretty well.

From the back of the box: 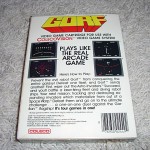 Prevent the evil robot Gorf™ from conquering the entire galaxy! Defeat one fleet, and Gorf™ sends another! First, wipe out the Astro-Invaders.™ Succeed, and you’ll battle a laser-firing fleet and diving robot ships. Your next mission: tracking and destroying expanding invaders which materialize from out of a Space Warp.™ Defeat them and go on the ultimate challenge… a one-on-one duel against the Gorfian™ flagship! It’s four games in one! 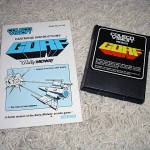 Gorf™ by Bally/Midway™ for ColecoVision™ was a highly anticipated game for the system. I have logged a lot of hours playing it. It was a space shooter that essentially consisted of 4 screens. One was essentially like Space Invaders but you had a force field protecting you instead of blockers, another was like Galaga with lasers, a third was a little bit like Gyruss and the last was a Flag Ship battle where you had to blast through a force filed then chip away at the Flag Ship until you could get a shot into its core. That was my favorite level because you had to have good aim to destroy the Flag Ship. I still enjoy playing this game today. The ColecoVision™ version was really well done. The play control was very good and the graphics and sound were top notch. I highly recommend this game (I actually like the ColecoVision™ version better than the arcade version) to anyone who likes Space Invaders/Galaga type games.!

Cosmetic Condition of my copy of this game:

Overall, I rate my copy: 8.0 – It is in excellent condition for its age!

Click the links below to see lists of games based on those attributes.