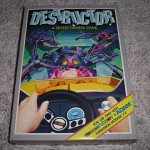 Destructor™ was developed and published by Coleco. I never saw this game in a store when it was new. I bought it on ebay in 2007 from a guy named Jim Kovacs. I bought a lot of games from him for various systems. I only mention his name because he was great to deal with and I would vouch for his authenticity if you are thinking of buying anything from him. He sells stuff for other people, and was selling the games I bought for a friend. This is my second game for the driving module and after playing it finally in 2007, I have to say that the box art is awesome and leave it at that… 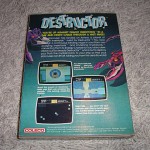 Your starcruiser has landed on Arthros, a planet of savage Insektoids™ruled by Destructor™! You race through a continuous winding maze in your Ram-car, dodging Insektoids™ and smashing Krystaloids™, converting them to Energy Crystals for your starcruiser. Watch out for deadly Destructor™ who is out to destroy you! Push the crystals back to your ship so that your starcruiser can lift off, taking you from this deadly world! 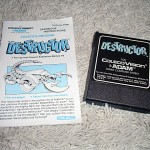 I am very glad that I have this game in my collection! That being said, I have to say that it was a little bit of a let down. The game is very simple, now… that being said… I’m sure that if I had some sort of nostalgia factor that I could relate this game to from my childhood, I could see myself liking it more. I never played this game until 2007 and would believe that I might be judging it unfairly. It actually has a decent story line and decent play control with the steering module. And, it is kind of fun destroying Insektoids™ and collecting crystals to repair your ship. I just didn’t really get into it, that’s all… Maybe I’ll try it again someday and write a new review.

Until then, enjoy the box pics, the artwork is fantastic, especially considering that this was an in house Coleco game! I don’t know who the artist was, but he or she did an excellent job with the packaging on this one and I’m sure it sold quite a few copies based on that alone! 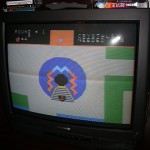 Cosmetic Condition of my copy of this game:

Click the links below to see lists of games based on those attributes.